Camp Stanislaus was founded in 1928 by Brother Peter Basso who incorporated fun with character formation.  In the early days, camp’s highlighted activities of fishing and swimming were due to our wonderful location.  From 1933 to 1939, Brother William Sharkey continued the camp tradition.

Brother Peter became the camp director again in 1939.  The program became so popular that management was obliged to refuse many applicants.  Brother Peter would visit across South Louisiana to recruit campers and counselors in training (CITs).  All counselors were either Brothers or Seminarians from Notre Dame Seminary in New Orleans.  With Camp’s growth, there was a need for more dormitory space and in 1943 Saint Stanislaus bought a house known as the “Sea Gull”, which was located south of school on the water side.  This had accommodations for about fifty beds. 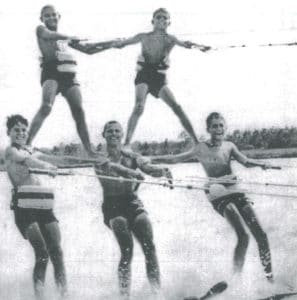 Br. Ramon, center, leads four campers in a pyramid on skis for the cover shot of the 1962 camp book.

In 1953, Brother Remigius David directed the 25th annual session of camp.  Thirty Brothers supervised 200 boys at summer camp that summer.  Taking advantage of the water front, camp offered fishing, swimming, sailing, rowing, and boating.  Brother Remigius gave a daily talk on character formation and the main trophy at the end of camp was a Character Cup.    In 1955, Br. Philip Lewis assumed the Camp Director role.  There were 35 brothers and camp now offered 2, 3, and 5 week sessions.  In 1960, Br. Ramon Daunis introduced water-skiing to Camp, which is still a favorite activity to this day.  In 1962, after 35 consecutive summers, Camp was discontinued since it deprived may young Brothers from attending college during the summer semester. 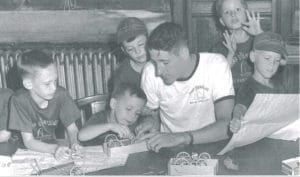 In 1968, the Principal of Saint Stanislaus, Brother Lee Barker, along with Brother Noel Lemmon recognized that the there was a need to bring back Camp.  When asking the Provincial to re-open Camp, Br. Noel and Br. Lee explained that Brothers who already had advanced degrees could volunteer to serve at camp along with a larger lay presence as counselors.  So after being closed for 6 summers, Br. Noel Lemmon reorganized Camp with 60 boys particip 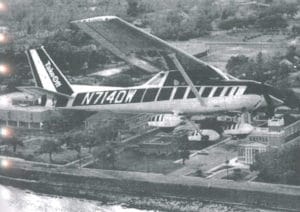 ating in that summer of 1969.  In 1974, Camp purchased the property at Shoreline Park and built a ski lodge on the river.  It is was known as the “Ski Camp”.  In 1976, camp added flying over the coast as an activity, since Br. Noel was a pilot.  Br. Noel would take 8 campers to the Stennis airport each morning and fly with two campers at a time. 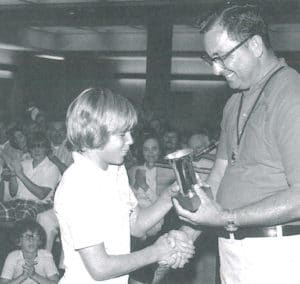 Br. Noel awards the Character Cup to a camper. This cup is now named in his honor.

In 1993, Camp celebrated its 60th session since 1928 and 25th year since reopening in 1969.  After serving as the Camp director for 30 years, Br. Noel retired at the end of the summer session in 1998.  During Brother Noel’s time as camp director, there were 11 Brothers who served at camp for more than 25 years:  Brs. Ramon Daunis, Lee Barker, Paul Mulligan, Eduardo Baldioceda, Raymond Sylve, Leon Stock, Pierre St. Pierre, Neri Falgout, Joseph Donovan, Albert Ledet, and Loyola Mattingly.

In 1999, Mr. Ted Schmidt (SSC ’74 Alumnus) was hired as the first lay camp director.  He continued the traditions of excellence for two summers.  Dr. Jeff Aycock (SSC ’89 Alumnus) took over the reins for the 2001 summer session.  In August of 2001, Mr. Mike Reso was hired as the third lay camp director.  In 2002, after only accepting resident campers, a day camper program was inaugurated for local residents who only wanted to send their child during the day.  In August of 2006 Camp was forced to close for a second time due to Hurricane Katrina which devastated much of the Mississippi Gulf coast and the facilities used by both the Camp and Saint Stanislaus. 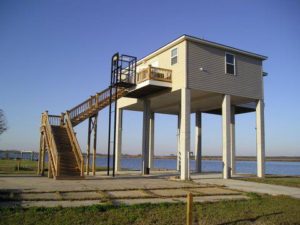 After being closed the two previous summers in 2008, under the direction of Mr. Matthew Shannon, Camp returned with two groups of campers.  In 2009 camp hosted a special “Operation Purple”  camp for boys who had family members in the military who were deployed.  Camp hosted this special camp for two summers.  In 2010, Mr. Joe Sylve took over as the camp director.  During this  time, camp continued to grow.  In 2012, Mr. Scott Pepperman (SSC ’94 Alumnus) was named Camp Director.  Mr. Pepperman with the help of Br. Dwight Kenney oversaw the building of the new ski lodge on the Jourdan River, which had to be rebuild due to Hurricane Katrina.  The ski lodge was named for Br. Ramon Daunis who introduced waterskiing to camp.  In 2013, Mr. Sam Doescher was named as the sixth lay camp director and in that same year camp accepted girl campers for the first time.  Mr. Doescher presently serves as the director, and camp continues to provide campers the opportunity to create new friendships, learn independence, improve social skills and build character.